Everybody in the know is aware that Tioman is surrounded by a a gorgeously clear sea. But what many travelers, even those of the scuba persuasion, don't know, is that Pulau Tioman's waters are practically awash with some of the most spectacular ship wrecks you're ever going to have the pleasure of diving.

From vessel remains that date to the ancient merchants of yore to vessels dating back to WWII. All of these are currently resting in our backyard. Add to that the world-class flora and fauna that inhabit these unique niches and you have yourself a dive excursion that you simply cannot pass up. 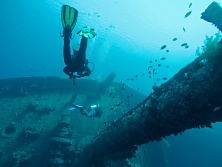 A school of juvenile barracuda near Renggis

And now, as of not so long ago, Tioman has a new wreck that was, quite literally, made for wreck diving. The former Royal Malaysian Navy warship KM Sipadan was scuttled just south of ABC Village in March 2012, for the sole purpose of encouraging new coral growth, additional fish populations and ultimately to enable divers to enjoy the bliss that goes from immersing in all this stunning sub-marine beauty.

Other wrecks suitable for wreck diving within Pulau Tioman's waters include:
Now, if you're piqued by all this exciting wreck-diving info and you want to try wreck yourself diving during your Tioman trip, use below form.