Tioman's hilly rocky terrain has several locations where its various mountain streams cascade over cliffs or granite boulders into rock waterfall pools below, ultimately finding their way to the sea. Reaching any of Tioman's three main waterfalls usually requires an uphill trek through the jungle.

Not to be missed: Asah Waterfall

Some of these treks are short, whilst others can be as long as several hours, depending on where you start. All of the waterfall treks, however, regardless of route taken, will prove to be worth your time and effort, because the crisp refreshing air and crystal-clear cool water near the waterfalls are a very welcome reward. 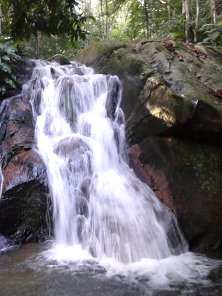 Tioman's highest waterfall is the Asah waterfall, located near Mukut village, in the southern end of Tioman. Set against the lush tropical rainforest backdrop, Asah waterfall is said to be one of the most beautiful and most famous waterfalls in Tioman. In fact, so photogenic is Asah waterfall that it was featured extensively in the 1958 Hollywood Blockbuster "South Pacific".

The Asah pools make for a refreshing swim, leaving you feeling utterly relaxed and absolutely revitalized at the same time. So if you're looking for a cold-water dip to enhance your circulation and get your energy levels up, then Asah Waterfall is the place to go.

Tip: Asah's natural site provides a cool change of scenery from Tioman's many beaches and is ideally suited for a picnic lunch. The waterfall can be accessed by way of the jetty at Kampung Asah or by trekking there from Kampung Mukut.

Book your favorite Tioman hotel near the waterfalls...

The village of Juara, along the eastern side of Tioman, also has an attractive waterfall. You'll find it along the road between Tekek and Juara, a short stroll down the man-made steps. Just follow the din of the cascading water. Juara waterfall isn't as impressive as Asah, but it's more accessible, and you'll find the location mesmerizing and rejuvenating all the same.

The falls behind Paya village, north of Mukut, are more rock falls than waterfall and lack the rushing gushing water volumes of its Asah and Juara counterparts. However, the tranquil setting will have your mind at ease in no-time too, because the sights and sounds here are just as hypnotic.

Use below form if you want more details about booking a jungle trek to visit one of our waterfalls.