Malaysia is one of a growing number of countries that subscribe to eco-tourism as defined by the World Conservation Union, up to and including environmentally conscious travel to relatively undisturbed natural areas to connect with nature. Eco-tourism activities promote conservation, tend to have low visitor footprint and increase the beneficially active socio-economic involvement of the local Tioman population. In other words, man serving the land serving man.

With Tioman's most renowned asset being the surrounding sea and all visible life therein, the eco-tourism focus has traditionally been sea-based. However, this status quo has recently been changing, as the forested hills of Tioman are gaining a reputation as an eco-tourism hot-spot too.

Botany and Zoology scholars come from far and wide for jungle trekking or to climb Gunung Kajang in hopes of spotting some of the unique jungle species Tioman offers. European bird-watchers and Japanese butterfly collectors are regular visitors too, along with reveling orchid enthusiasts. 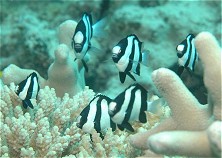 In fact, so distinct and intriguing is Tioman's indigenous jungle flora and fauna that it's been featured in various well-known international media, such as the Animal Planet Channel series and even National Geographic. It's by virtue of Tioman's dense emerald rainforest that it's the most biologically diverse island in the South China Sea, an honor that has earned it the enviable title "Malaysia's Galapagos Island". 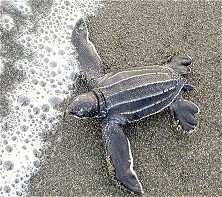 This turtle hatchling is safe, for now 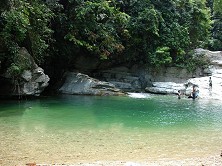 Reef check is a volunteer programme to monitor Tioman's ubiquitous coral reefs by painstakingly counting the species of corals and their supporting animal and plant life. Through comparison of the year-to-year results, the reef researchers get an accurate picture of the health of Tioman's coral populations. Click here if you'd like to learn more or wish to join Reef Check. 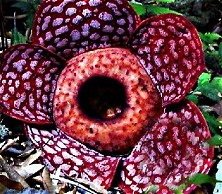 The Turtle Sanctuary is a project set up by determined volunteers to protect the various endangered species of turtles and their eggs from predators, including man. 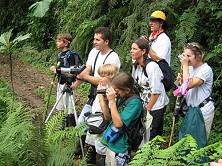 Bird spotters having a field day in Tioman

In the 1960's and 1970's turtles were found everywhere in the Seri Buat Archipelago. The Tioman waters, especially, were teeming with healthy populations of turtles, in particular the leatherback turtle. 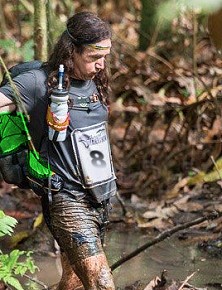 SAS International Eco Challenge runner slogging
it out in Tioman's humid jungle But it wasn't long before the seas around Tioman were subjected to overfishing, illegal fishing and the poaching of eggs. In fact, at one point turtles were about to become extinct.

Enter the group of conservationists at Juara Turtle Project. These volunteers have been working tirelessly to save the island's turtles from extinction. Their modus operandi is to collect turtle eggs and then incubate them, before ultimately releasing the hatchlings to the sea. This process minimises the threat of the eggs being unearthed en masse by poachers or getting picked off by the multitudes of swooping air-borne predators in particular. Once the baby turtles are in their natural habitat, the sea, they have to fend for themselves, which ensures that the delicate natural balance remains in equilibrium.

Thanks to the efforts of The Turtle Sanctuary, as well as a number of other turtle sanctuaries around the area, set up with the help of the Malaysian Fisheries Department, turtles are now staging a comeback. Click here if you want to visit or perhaps contribute to The Turtle Sanctuary.

Unique, almost alien and breathtakingly exotic, the Rafflesia flower is a very special treat for anyone lucky enough to locate one, especially when it's in bloom, a time when it can reach a full one meter in diameter and an astonishing 10 kilograms in mass!

A Rafflesia flower in bloom is a really rare site for a number of reasons. First of all, it only blooms a mere 3-5 days each year, at totally random times,. And secondly, only one particular species of vine in the world is strong enough to support the weighty flower.

As if these odds aren't long enough, many immature flowers decay at an early budding stage before they can reach the mature flowering stage. Worse, the few flowers that do bloom simultaneously tend to be of the same sex, resulting in the chances of successful male-female pollination being severely diminished.

Due to Rafflesia's scarcity and short lifespan, much is still unknown about it. However, Pulau Tioman is one of the very few reasonably accessible locations in South East Asia that offers Rafflesia's spectacular beauty in the form of the Rafflesia cantleyi species. That is, if you know where to look. Click here if you're interested in setting up or joining a mountain jungle expedition for this most mysterious flower, Rafflesia.

SAS International Eco Challenge a.k.a. the Tioman Royal Race is a tough-as-nails 30 km jungle gruelathon that takes hyper-fit runners through the thick of the jungle, along tree-root-riddled banks of rivers and streams and even across some of Tioman's unsheltered sandy beaches. The distance event is held in Tioman yearly, not only to celebrate the birthday of the former head of state Sultan Abdul Samad Shah, but also to promote sustainable tourism on the island. One Kenyan winner, Moses Kandie, has dubbed the SAS International Eco Challenge the hardest he's ever run, a testament to the race's extreme difficulty level. Click here for more details.

Bag your groceries in durable cloth carriers. instead of plastic bags.

Compost your kitchen and garden waste.

Dry your washing in the sun instead of a dryer to save energy.

Enjoy nature — go for an outing at the nearest park, nature reserve, beach or waterfall. Don't forget to take your trash with you when you leave!

Forgo that trip to the mall; you don't really need new clothes, do you?

Give green gifts such as rechargeable batteries, tree-planting certificates, organic produce or membership to an environment club.

Hold a recycling event at your office, school or residential area (right).

Join a nature or conservation society.

Know your labels. Read product descriptions to determine if they contain recycled material, are energy-efficient or contain hazardous ingredients.

List down ways to curb electricity use to reduce your carbon emissions.

Make your home toxic-free. Replace conventional household cleaners with items that are earth-friendly.

Never throw anything away without first asking if it can be reused or recycled.

Open burning is polluting — report it.

Phase out plastic trash by packing food in tiffins or reusable containers.

Repair rather than replace broken items to lengthen their lifespan and prevent more trash.

Separate your garbage and drop off recyclables at the nearest recycling centre.

Turn vegetarian for the day. Your body and Mother Earth will appreciate it.

Use public transport instead of your car — do it at least once a week if not more.

Visit the zoo and learn about wildlife.

Water is precious and costly to treat — don't waste or pollute it.

Xerox both sides of the paper.

You can make a difference. Live a simpler lifestyle and buy only what you need and will use.

Want to know more about eco-tourism in Tioman? Use below form.