I've always been fascinated by remote jungles and far away mountains. Mix these two together and add an element of adventure navigation, physical hardship and endurance, and you've got my dream weekend.

I'd heard of Gunung Kajang through friends who'd reached the halfway point, before having to abandon their ascent. Not much is known about the mountain. In fact, I hear scientists are still discovering hitherto unknown species of flora and fauna to this day. In my view, that makes Gunung Kajang more than worthy of an exploration. Along with the fact that it's on few hikers' to-do list. Why? It's simply too tough to climb for most.

We set off around 9 am, aware that we'd need to maintain a pretty decent clip in order to complete both the slope's ascent and descent in a single day. The weather was an additional factor, because the past week or so, Tioman had been subjected to repeated heavy downpours.

But for now, as we strode across the shade-dappled forest floor, everything was looking up; the weather was clear, and the terrain, while rocky and slippery at times, wasn't angled up or down too much, quite easy to navigate. As far as limbering up for the main course, Gunung Kajang's first 30 minutes were ideal.

As you proceed up Gunung Kajang, however, you can feel the vegetation creep in on you. The open spaces gradually make way for a gloomier, thicker jungle, dominated by more and more over-sized trees, vines and thorny tendrils reaching down from above especially. The scene ahead looked like a back-drop from Jurassic Park. 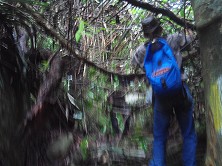 Our parang came to good use

The relentless din overhead caused by the screech from countless cicadas made the setting feel almost prehistoric. It felt like we'd time-traveled back 1000 years. Even the bugs we saw scurrying through the leaf litter were huge, easily 2 to 3 time bigger than their kin in the regular world below.

As we headed up further up and the trees and undergrowth became ever more rugged, the ground beneath was now beginning to angle up steeper too. In fact, every now and again, we needed to contort our bodies so as to ease through the thick woody rotan, thickets and closely-packed tree stems, which, more often than not, were covered with sea-urchin-like spines up to 10 centimeters long! 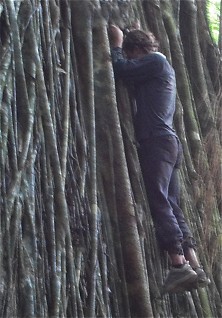 Scaling a monolith covered by a
strangling root lattice

This is as primary and pristine a jungle as you'll ever get to see. There was no longer a trail as such. Instead, we were trying to squeeze through the dense walls of vegetation by seeking out the path of least resistance, a little gap there, a small opening here. Every now and then we had to resort to wielding our parang, a few well-aimed whacks clearing the way a few feet at a time.

After 2 hours of non-stop hiking, snaking and crawling, it was time for a break, time to rehydrate and have some crackers, to make sure our energy levels didn't decline too much. After all, the hardest part was yet to come. 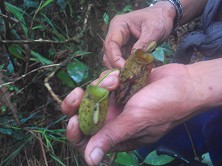 Also, as we were reaching 300 meters altitude, it was time to insert the tobacco leaves into our socks to deter the leeches that we were about tot encounter. Tobacco leaves are an effective repellant to leeches. It won't deter all leeches, but it will reduce their numbers.

The scene behind us was just a complete green-out: nothing really discernible amongst the leaves end moss-covered tree stems, no details at all. All we could see was a huge wall of emerald green around us. Meanwhile, the scene in front looked barely penetrable at all. The jungle from here on end was so dense that daylight barely reached through the canopy. Not that there was a lot of daylight, because it looked like we were going to get more rain. 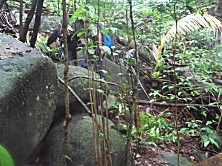 Massive boulders are strewn
all over the jungle floor

Right on cue, just as we set off after our break, the skies opened up. In fact, the rain was coming down with such intensity that it took less than a minute for us to be totally drenched, the weight of our clothing and the now slippery leaves underfoot upping the difficulty level even more.

We trudged our way upwards though, our senses constantly bombarded by the jungle relentless sights and sounds.

A scene straight out of a Tarzan movie

The air was thick with moisture, our bodies giving off steam in the clammy forest air. Yet, the discomfort felt somehow awesome, a unique sense of adventure and raw excitement that doesn't compare to anything else. The realization that we were walking where very few people have ever set foot is hard to describe.

As far back as 1000 AD, Tioman used to be both a navigational aid and a port of call to the trading ships that traversed the oceans. Tioman was used to replenish the vessel's coconut, banana and water supplies, its devil's horns easy to spot by the mariners, its fertile soils producing an endless source of coconuts and bananas year-round.

I imagined how my tracks and those of the ancient travelers must have surely been close to converging as we clawed our ways up this primordial landscape.

It was at about 400 meters altitude that I felt a barely noticeable sting around my ankle. It was a leech that had settled down for dinner. I flicked it off, surprised that I hadn't noticed it crawling along. it was the first of dozens we'd find on our skin, mostly on our lower legs,but some venturing as high as our waist, 1 or 2 even reaching chest high. Leeches don't carry any pathogens, but it's quite unnerving to see them clinging to your skin. And they're messy eaters.

The last 100 meters to the summit are the toughest of the climb. By now we were quite drained from the physical exertion, the constant state of alertness and the humidity. Fortunately, the anticipation of almost reaching the very top of the mountain, Tioman's highest point, kept our legs going.

Reaching the top is simply awesome. You know achieving this feat, especially in a single day, beating the countless obstacles, the countless bugs, the thorns, the many battles with the vegetation, this isn't something that just anyone can do. And so the accomplishment is a real buzz, a thrill and half, simply awesome and highly recommended to those with an adventurous streak.